> Back to all Events

Colonia, Yap. Long before cars arrived on Yap, people got around the small island on foot. Today, a web of ancient stone paths that connect the villages is still in use. This past Saturday, a group of travelers arrived aboard the MS Bremen cruise ship and set off to explore a section of the Tamilyog Trail, a four-mile hike from beginning to end that follows some of the stone paths through the forest and across the island from east to west.

Led by ethno-biologist and long-time Yap resident Dr. Marjorie Cushing Falanruw, the hikers were from Germany, Austria and Switzerland. As they applied bug spray to arms and legs and necks, Dr. Falanruw offered everyone a list of the birds that live on Yap. “First," she said, "we are going to pass through a working forest that is a pharmacy, a source of food and a hardware store.” As she spoke, one woman reached down and touched a small bush. “Good medicine,” she said. “Yes, it is,” Dr. Falaruw replied with a smile. “Very good medicine.” The group started up the stone steps that led from the road to the path. “Then,” Dr. Falanruw continued, “we will go through the wild forest and finally arrive at a savannah.” Among the many rewards for the hikers’ effort as they reached the apex of the trail would be a magnificent view of Yap’s hills and the surrounding sea.

Hosted by Manta Ray Bay Resort & Yap Divers, the ship’s 130 passengers and 100 crew members explored the island during their stop at the remote island, opting for their choice of a land tour led by local Manta Ray Bay guides that included one of the island’s famous stone money banks and World War II memorials; snorkeling; kayaking through the mangroves; the guided hike on the Tamilyog Trail; or sightseeing on their own by foot.  A traditional dance at the Living History Museum and carving and canoe-building demonstrations at the nearby canoe house brought the visitors together at the end of the day.

“We were very excited to be on the itinerary of the Bremen,” said Bill Acker, owner of MRBR. “The channel in Yap is narrow so only small cruise ships can come to call. But when they do, we strive to give the passengers a memorable experience and invite them to come back for a longer stay.”

The three-week journey aboard the Hapag Lloyd Cruise Line ship that was awarded four stars by the Berlitz Cruise Guide 2018, began in Palau and stopped at the atoll of Ngulu before arriving in Yap. After a day at sea, residents of the island of Lamotrek would greet the ship next and provide a day-long introduction to life on one of Yap’s neighboring islands that is famous for its master navigators. Kosrae, Majuro, Kirabati and Tuvalu were among the other islands and atolls on the ship’s itinerary that ends in Fiji. 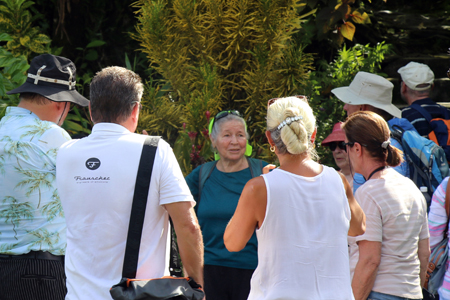